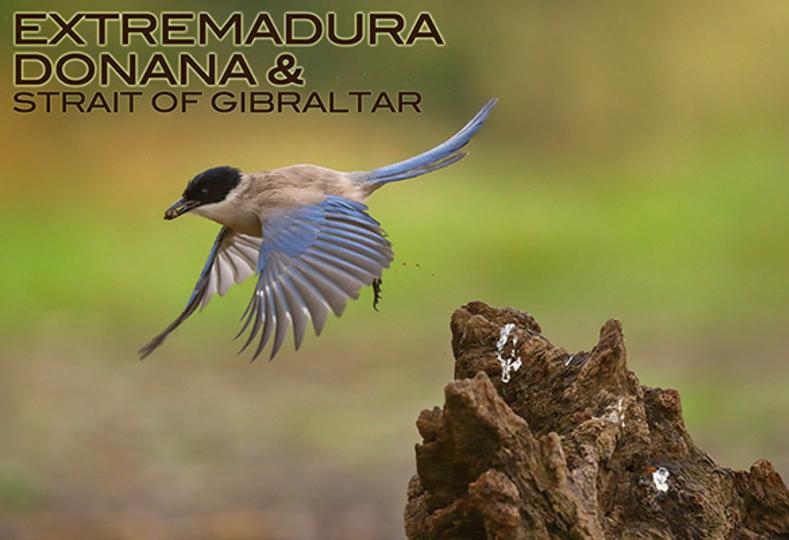 BOOK NOW TO RESERVE YOUR SEAT

Fees are for a minimum of 2 persons at booking

Single participants may include a small surcharge

A seven day tour of one of Spain most well-known birdwatching regions, Extremadura and the Monfrague National Park, hope to the Spanish imperial eagle and Dońana National Park, stronghold of the Iberian lynx.  Explore the Strait of Gibraltar and witness incredible bird of prey and stork migration, all with a fully licensed local guide and a comfortable a air-condition vehicle.  A trip to remember!  Please contact us to reserve your place for spring or autumn.

- Fees based on shared accommodation

IMAGES FROM THIS TOUR

We head towards Extremadura stopping on various birding sites along the way.  a lot of open area species can be pickup here. Based at Trujillo 3 nights.

STRAIT OF GIBRALTAR
We leave Doñana after midday and head to the Strait of Gibraltar. We exploring the northern shore of the famous Strait owith magnificent views of the African continent and the famous Rock of Gibraltar nearby.  We will experience the amazing close views of bird of prey & stork migration, as well as visiting nearby Northern bald ibis breeding colonies and many other species.  Overnight La Linea.

BOOK BEFORE SEPT 30 2021 AND GET A 10% DISCOUNT - GROUP BOOKINGS ONLY
Thank you for contacting us! If needed, you will hear back within 48-72 hours.
View on Mobile